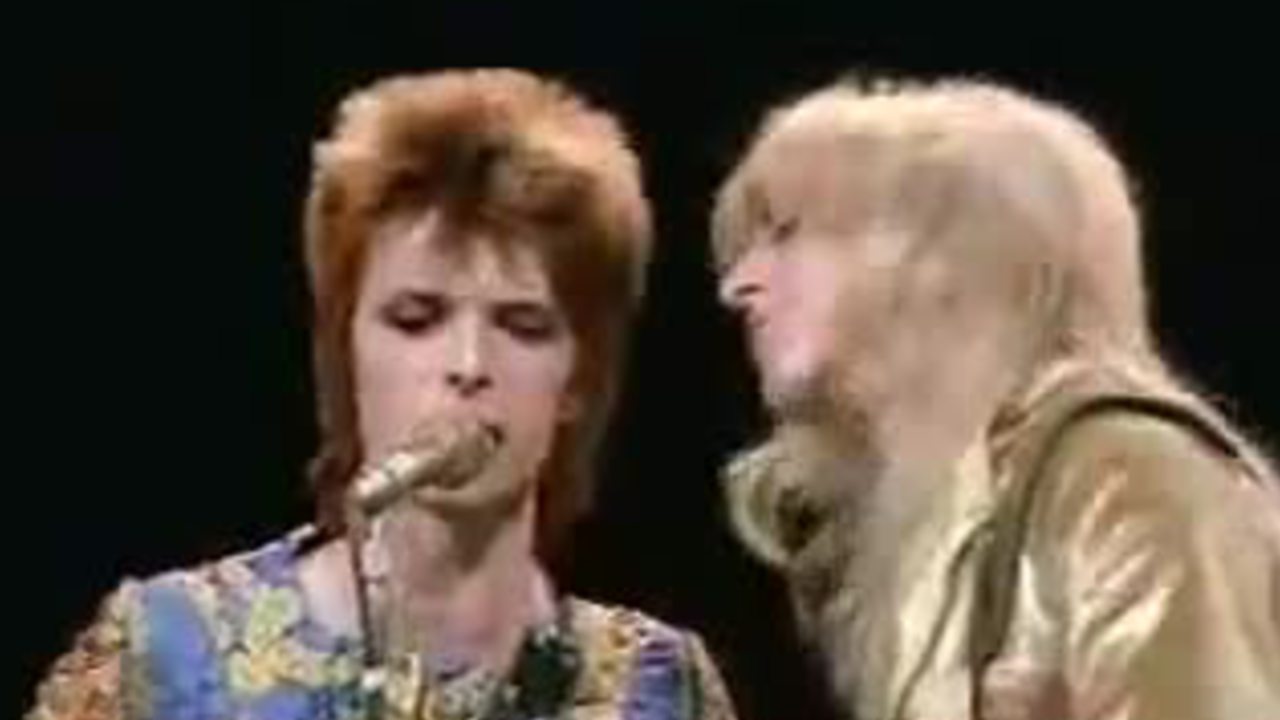 17-year-old David Bowie is interviewed in 1964 on the BBC Tonight program by Cliff Michelmore as the founder of “The Society for the Prevention of Cruelty to Longhaired Men.”

David Bowie performs his song "Life on Mars?," which first appeared on the 1971 album Hunky Dory. It was later released as a single and climbed to the top of the charts in the UK.

David Bowie - Be My Wife

"Be My Wife" is a single by the great David Bowie from his 1977 album Low.

David Bowie performs one of his most famous hits, "Starman". The song describes a message of hope to young people, brought by the character Ziggy Stardust, Bowie's alter ego. Commercially, the song was a milestone in David Bowie's career and has remained a big favorite on the part of his fans.

Here is the 1972 opening track of The Rise and Fall of Ziggy Stardust and the Spiders from Mars album, by David Bowie. In this "Five Years" melody which was inspired by a dream, the British singer foresees what would be the end of the world… with compassion and melancholy.

David Bowie - Where Are We Now?

A music video by David Bowie performing "Where Are We Now?". A stark, but hauntingly beautiful song to the grand city he once called home, Berlin.

David Bowie has been a major figure in the world of popular music for over four decades, and is renowned as an innovator, particularly for his work in the 1970s. He is known for his distinctive voice as well as the intellectual depth and eclecticism of his work.
"Rebel Rebel” was released on the album Diamond Dogs in 1974.

David Bowie - All the Young Dudes

David Bowie gives a great live rendition of the Mott the Hoople classic "All the Young Dudes". He asks his fans to refrain from singing along, but they don't seem to follow his orders!

MTV has unearthed an amazing clip of David Bowie backstage at Live Aid with Thomas Dolby, talking about Labyrinth and his “Dancing in the Street” music video.

"Let's Dance" is the title track from David Bowie's 1983 eponymous album. The music video shows Bowie playing with his band (including the late, great guitar player Stevie Ray Vaughan) while impassively watching an Aboriginal couple struggling against metaphors of Western cultural imperialism. Bowie described this video as a very simple and direct statement against racism and oppression.

"Lazarus" is the last single released by David Bowie before he passed away. The video shows him lying on a bed with a bandage and buttons sewn over his eyes...

The legendary rocker died on January 10th, 2016 after a battle with cancer. He is survived by his wife and two children, and mourned by fans around the world.

In David Bowie's song "Ashes to Ashes," he refers to one of his earliest hits "Space Oddity." The video had very advanced visual effects for its time, and also shows off Bowie's eclectic visual style.

"Space Oddity" remains one of David Bowie's most famous songs. Inspired by Stanley Kubrick's film 2001: A Space Odyssey (1968), it is about the launch of Major Tom, a fictional astronaut.

The lyrics of David Bowie's song "Changes" are often seen as a manifesto for the many transformations he himself went through as an artist, and frequent reinventions of his musical style throughout the 1970s. In our fast-changing world, they are also a reminder to accept what comes and remain open to the ideas of the next generation.

For the final song of this concert with his band The Spiders from Mars, David Bowie performs his song "Rock 'n Roll Suicide."

"China Girl" was originally co-written by David Bowie and Iggy Pop when they lived in Berlin. Although there are many interpretations of the song's meaning, the video particularly looks at and parodies Asian female stereotypes.